skip to main | skip to sidebar

It isn't always about running

This blog is not always about running.
Taking a look at all of the entries I've made here - they are ALL about running.
"Challenge Yourself" was meant to be that, I guess. I started with this blog to document a lot of the races and runs that I have set as goals in my little world of running. I am so thankful for all of the experiences in the past few years of my running. It's been very good.
I just don't normally talk about my personal life, my job or much else here. Sure, "Schmoopie" gets a little press once in a while - but that is because she runs also.
I will break away from the running on (hopefully just this entry) to give you a non-running update.
Last Friday night, our farm was hit by a storm/funnel cloud/tornado.
It really doesn't matter what the NOAA will call it, this storm packed a pretty good punch.
We are all safe and in good spirits. I believe that events like this are given to us for a good reason. It was miraculous that the buildings and equipment that I use the most were left nearly untouched. The buildings destroyed did not have livestock or valuable items in them, the equipment damaged was older and not being used. Our house had minimal damage.
This weekend we had many friends and family stop by and help with the cleanup effort. We are so thankful for these people in our lives.
I'll share a couple of pictures here. Our thoughts and prayers go out to those who suffered much greater losses than ours this last couple of weeks. 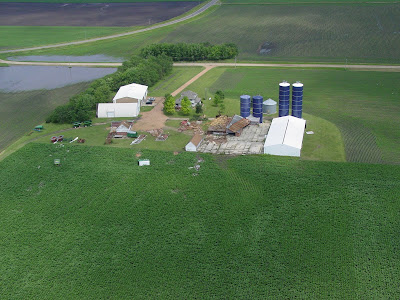 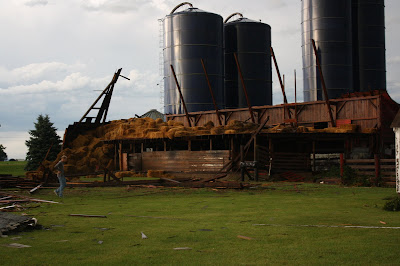 Ok, now back to running......
Afton 50K is coming up this Saturday. My legs are feeling pretty good, and I'm hoping that I will be able to get up and down the hills in good order. There will be lots of top competition there with the 25K held as the USATF MN Trail running championship and the 50K being the USATF MN Ultra championship.
See you there!
Posted by johnmaas at 3:38 AM 3 comments:

Last Saturday I participated in the FANS 12 hour run held at Lake Nokomis in Minneapolis, MN.The 24 hour version is in its 21st year and the 12 hour run is now in its 9th year. For more information about the FANS event, click here.
This year was special, as my sister JojaJogger came up to participate in the 24 hour event in preparation for her first ever 100 mile run at Burning River the end of July. She had been signed up for this a long time ago, and Mary had agreed to crew her for the run. I signed up about 1 month ago, and she gave me a little grief about "only" running the 12 (all the cool kids were doing 24 she said....).
I'm in pretty good running condition right now, but hadn't done an ultra event since late last year. I just thought I would go out there, get comfortable, and see what happens. Then, my sister posts on her blog that to get a "passing grade" of C for her run, she needs to run more miles than I can in 12 hours.
The sibling rivalry is on....
Fast forward to 8:00AM on a somewhat humid morning at Lake Nokomis. Final instructions are given, and 24-hour legend Mike Henze is there to ring a cowbell and get us started.
From looking at the list of entrants, I knew there were 2 runners in the 12 hour field that had very impressive credentials. John Storkamp was out there again to seek the course record, and Carolyn Smith was a runner that no one could overlook. Storkamp told me before the race that at the Fall 50 in Door County, she blew past him in the final miles to win the race outright. He has a lot of respect for her.
We were off on the first lap, and Storkamp laid back - he was running behind me for the first mile. But at the end of the first short lap, he pulled ahead. Others right beside me were Stan Ponkin and Zach Gingerich (who was running 24 - I guess he is a cool and very talented kid). 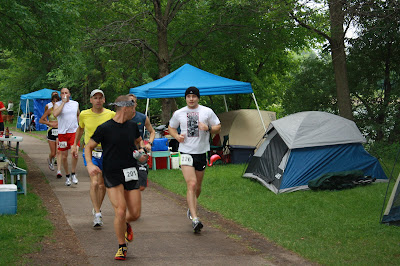 Notice how Storkamp is looking back and seems to be asking "is anybody going to run with me today?"
I held steady and the others pulled ahead. Holding steady meant 7:55/mile and it felt easy. But it was still very warm and humid, and I was going through about 48 oz. of water per hour. I increased my intake on SaltStick capsules to about 4/hour. Those laps I spent a lot of time trailing Carolyn Smith and Sonya Decker, sometimes running with Zach also. They were consistently hitting about 19:20 per lap. It wasn't long (sometime after mile 20) when Sonya dropped back. Carolyn told me she had some stomach issues.
So for the next 30 miles, Carolyn, and I played cat and mouse. She would pull ahead, but I would gain time every lap because Mary had my filled water bottles ready for me. No stopping at all. And then Carolyn would run with and sometimes pull ahead.
We talked about Storkamp, and how he sometimes goes out too fast. We agreed that if he didn't lap us by mile 40, we are in contention.
The rain started up, but really I didn't mind at all. It felt great, and I could reduce my water and elctrolyte consumption. I know the pace eroded a bit here to about an 8:30/mile but that is still pretty good at this point.
Came into mile 50 with a time of 6:55:06, 45 minutes faster than my best 50 mile run. Oh well, I'm in too deep to back down now!
It was sometime here where I did not see Carolyn any more, but knew she was somewhere behind me. Storkamp was ahead, but I had no idea where. My friend Ryan ran with me a bit here and I asked him to see if he could spy out where they were.
At mile 69.5, Storkamp was 8 minutes ahead and Carolyn was 4 minutes back.
Now is when it gets tough to focus. More than two hours to run yet.
The guys from MN RED came out and ran some laps with me. It was Brian, Rob and Coach Ron. They told stories - a lot of them pretty funny, and it kept my mind off the pain. We were able to hold onto a 9:00/mile pace even in those final laps.
Ryan updated me that at mile 79.1, Storkamp was 14 minutes ahead and Carolyn was 7 minutes back. Storkamp was not fading, he was getting stronger. Oh well, just try to stay steady and not blow up in the last 40 minutes.
I made it back to the lap count area with 19 minutes to go - not enough to run another long lap (I did not have any 7:30 miles in me at that time), so I started the short laps. I completed 8 laps (2 miles) and there was 55 seconds left.
Pushed it pretty hard to get the last 1/8 mile in just as time expired.
Final result: 83.69 miles for 2nd place overall.
John Storkamp compiled an amazing 85.49 miles, and Carolyn Smith established a new women's course record with 82.69 miles.
Now, back to the sibling rivalry....I was able to wind down a bit, clean up and get 2 hours of sleep. I came back to the course to crew for my sister and give Mary a break. Joja was still moving along well, but was reduced to walking now. She had PR'ed already at the
50 mile mark and was doing fantastic. She had a goal, and that was to out-do her little brother. And I was going to help her do it!
The night actually went by quickly, I was able to walk with her quite a bit, helping my legs from tightening up too much. She had to stop a couple times in the med tent to get some blisters fixed up, but she was determined to keep moving. By the time 24 hours was up, she had compiled 85.24 miles and got her goal.
Congratulations, you kicked my butt!! 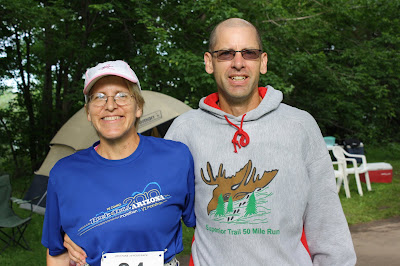 Here's a picture of the two of us shortly after the 24 hours was over.
The post race breakfast was excellent and the awards ceremony was short and sweet.
Right now it is 7 days post-race and I am feeling very good. No structural damage at all from the run, but it will take all of 4 weeks to be ready for Afton 50K.
Thanks for reading,
John
Posted by johnmaas at 12:40 PM 3 comments: